Successful business excutive Cassandra Adams was 35 years old when she ran away from home.

She didn't plan to run away.  It started out as little get-away.  A spur of the moment trip with a blast from her past.  Just for a fun.  What you should know about Cassandra is that she doesn't do "spur of the moment" and she definitely doesn't do fun--well, at least she hasn't for a very long time.  Even Cassandra had to admit that this impulsive trip was out of character for her.  Yet the longer she stays away, the more she realizes she has missing out on so much.  Hiding behind her fortress of long hours, schedules and rules, shielded her from joy and fulfillment and...love.  Ah, sweet love! It was love that finally lured out from behind her fortress.  Will love drive her back into hiding? 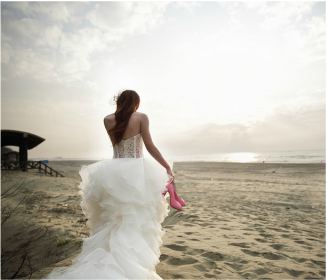 Prologue
The thunderous pounding she heard must have been the door.  It certainly wasn’t her heart –surely that had died three days ago.  And it couldn’t have been the throbbing temples from her massive hang over.  She didn’t even have a hang over.  She was numb enough as it was.  Alcohol would have only made her nauseous.  What was that pounding?  Make it stop.  Please, God make it stop!  All she wanted to do was sleep.  Keep her eyes closed and disappear.  Fade away.  But the pounding was making that impossible.  It was a blatant reminder that she could hear, that she could feel and was, therefore, still alive.  She didn’t know what that pounding was, but she did know that voice:  “Enough is enough, Cassandra Adams.  Now open this door or I’m calling the police!”

“Okay.  Okay.”  Cassie heard her mouth say.  She didn’t even recognize the sound of her own voice.  Possibly because her throat was so dry from all of the wailing and moaning she had done over the past few days.  Possibly because all of her hopes and dreams had been sucked out of her.  Possibly because her face was still buried in the sofa.  Cassie peeled her face from the beige leather cushion and sat up.  The clock read 2:12 in the afternoon, but the gloom of the room made it seem like midnight, curtains pulled tight blocking out any trace of sunlight and cheer.

“I’m coming!”  Cassie whined, like a twelve year old being dragged off to church.

With each step she retraced the tracks of her tears that led her to the couch that day.  Bare feet stepping gingerly on ivory colored invitations with ornate silver script.  Bare feet striding over the white cardboard box strewn on the floor, which once held her veil.  Bare feet stopping at the door where a two carat ring lay discarded, no longer the source of envy but of humiliation.  Cassie took in a deep breath, braced herself and opened the door.  The look on her mother’s face said it all:  My daughter, the walking zombie.

Cassie didn’t say a word.  She turned and trudged back to the comfort and security of her sofa.  Darlene followed with quiet footsteps.  As she walked, she studied her little girl.  She almost looked like a little girl—a pathetic little girl—but a girl none the less.  Frazzled hair, barely held together in a ponytail.  Baggy, University of Pennsylvania gym shorts drooping off of her backside, and a tiny a white tank hanging off of one shoulder.

Cassie wrapped herself in her comforter and plopped back on to the couch.  Darlene cleared off a space on the loveseat.  When she sat, she crossed her legs and leaned her body away from Cassie, as if she was infected with an incurable disease  --bad relationship-itus.  Well, f I am infected, I got it from you.  Cassie thought.

“So, how are you?”  Darlene asked, cheerfully, after a moment of silence.

Cassie shrugged, then fumbled with her French manicured finger tips.

“Have you decided what you’re going to do?”

Cassie rolled her eyes and said smugly, “Oh, I don’t know.  I was thinking about going over to the salon and getting a mani-pedi.”

Darlene’s face instantly became flushed.  “Don’t sass me, young lady.  This is not my fault.”

It absolutely was her fault, Cassie thought.  Darlene was the one had who filled her head with all that junk.  Made her believe in lies.  Read bedtime stories to her, since before Cassie could speak.  Stories of handsome princes, riding in on pretty white horses, to carry fair maidens off to their happily-ever-afters.  Darlene was directly responsible for feeding Cassie a steady diet of the “Find your Mr. Right and all your problems will be solved” doctrine.  Sure it was irrational thinking, but Cassie wasn’t interesting in being rational at the moment.  But beyond that, she wasn’t interested in anymore drama either.  She didn’t want to pick a fight with her mother.  She would listen to Darlene, let her pretend to be the devoted mother for a couple of hours and then sink back into the beautiful misery she had found nestled deep with in the cushions of that old leather couch.

Darlene raised her hands in the air in surrender.  “I’m sorry.  I’m sorry.  Didn’t mean to push,” she said in her high-pitched “I’m not trying to be a bother” voice.  She folded her hands and sat quietly, not sure of what to say now.  Darlene looked around the room and resisted the urge to clean it.  The place looked like a tornado had just blown through.  A large white sack lay at the base of the sofa.  She looked closer.  That was no sack.

“Is that your…”  Darlene gasped then scooped up the designer wedding gown and cradled it in her arms like a wounded soldier.  The dress they had hired some big name designer from Los Angeles to create.  The dress they had both wept over when they first saw Cassie wearing it.  “This is a $20,000 dress.  You can’t just throw it on the floor like an old sweat sock.”

Darlene lowered herself back into the seat and said grimly, “So you have made your decision.”

“What choice do I have?”

“He’s not the first man to cheat, Cassandra.”  Darlene pulled the bulk of the gown on to her lap and began smoothing out its silk bodice.  “I mean, if we all threw away a man because he was unfaithful, the world would be filled with a lot of lonely ladies.”

“True.  Or maybe the world would finally be filled with men who learned to treat women with respect.”  Cassie shot back.

“So, no room forgiveness?  No allowances for mistakes in your perfect little world?”

“I’d hardly call lying to me, so he could spend all weekend in the bed with the Double Mint Twins, a mistake.  It all seemed pretty deliberate in my book.”

That made Darlene pause.  “He didn’t tell me they were twins,” she said, and stared off for a second as if visualizing the whole scene, then quickly shrugged it off.  “Regardless, Scott is handsome, successful, well respected at his firm—prime husband material!  You want to throw all that away because he has one tiny flaw?  That’s like refusing to buy a Rolls Royce because it has one tiny smudge in the interior.”

Cassie threw back her comforter in a huff.  “Excuse me, but if I’m shelling out all that money for a Rolls, there better not be any smudges on the interior!  I think I’m entitled to at least that much.”

Darlene’s eyes narrowed on her daughter.  She folded her arms, causing her bracelets to clink and clank against each other.  “All right, Miss Holier Than Thou,” she said. “So what are you going to do now?”

That was the question, wasn’t it?  The thing Cassie had been wrestling with on the couch for the past three days.  For two years her future had been set.  Her future was Scott.  Two weeks from Saturday they would’ve been married.  Three weeks in the Greek Isles for their honeymoon then back home to their happily little life as husband and wife.  Cassie would putz around in her dad’s company for a couple of years until she was ready to have a baby, then quit.  She would spend the next couple of decades being a loving mother:  Mommy and Me, den mother, PTA, football boosters, prom chaperone.  Her life would be devoted to caring for husband and their three children (two boys and a girl).  And if she ever got bored, she could always go back and work part-time in daddy’s company.  But honestly, how could she ever be bored with a life like that?  Then when the nest was empty, she would take up photography, travel the world with Scott and spoil her grandchildren rotten.

Now standing in the shower—forced to take a shower by her mother—Cassie let the warm water permeate her brain, flushing out all memories of Scott.  She could hear Darlene in the living room, ripping open the curtains.  Cassie imagined the blinding white light of sunshine flooding the room.  By the time Darlene finished, the room would be sparkling clean and lovely and beautiful, as if no darkness ever dared invade that space.  Good riddance.

Meanwhile, Cassie shampooed, shaved and sugar scrubbed until her body tingled.  Tingles of possibility.  It dawned on her:  The end of Scott meant the beginning of Cassandra.  When she really, really, really thought about it, she did have something to be excited about.  She had a chance to remake herself.  Looking at the face staring back at her through the steamy bathroom mirror, she did not like what she saw.  Everything about her, even down to her wet blond lochs, screamed Scott (she was naturally a brunette, but Scott loved blondes, so she dyed it).  Ridiculous.  She might as well have had “Scott’s Girl” tattooed on her forehead.  Never again would she allow a man to exert that much influence in her life.  She would be her own person.  Chart her own destiny.  And if a man wanted to tag along for the ride, he would have to be the one to dye his hair blonde –or something like that.  Bottom line, no more fairy tales.  She would write her own happy ending.

A knock at the door.  Before Cassie could answer, Darlene stuck her head inside and, in hushed tone, announced, “Um…Honey?  Scott’s at the door.”

Glam shot!
This was the first novel that I ever wrote; and in many ways it has been my labor of love.  It  so embodies my own fears and longings about love that I felt it too personal to share (though none of the events in the book reflect anything that ever happened in my life).  Yet, I find myself coming back to this book and getting lost in it all over again.  Over the years it has grown and evolved, as I have grown and evolved.  Last year, I began to think maybe there is someone out there who can relate to Cassandra like I do.  Someone who desires love and fears it all at once.  If so, this book is for you.

But it does need some polishing.  Over the next few months I will be posting other chapters, photos and other inspirations as I work to clean up RunAway Love and make it shine for you.  So check back from time to time and see where I am.  Feel free to share your thoughts as well on the book as you follow me on this journey.  I've set a target date of December 2015 for the release, which is my birth month.  What a fitting way to celebrate my birthday, sharing a story that I love so much with the rest of the world.  -Cat
Cat Meyers 2015